Valencia to pay tribute to Marco Simoncelli on Sunday

The MotoGP community has been paying tribute to Marco Simoncelli throughout the Gran Premio Generali de la Comunitat Valenciana weekend in a variety of ways, and on Sunday the entire paddock at the Ricardo Tormo circuit will gather to make a collective dedication to the late Italian rider.

At 10.10am local time on Sunday morning riders from all three categories of the World Championship have been invited to depart from Pit Lane as a group, and complete a lap of the track in honour of Simoncelli.

The procession will be led by Marco Simoncelli’s San Carlo Honda Gresini RC212V bike, which will be ridden by 1993 World Champion Kevin Schwantz. END_OF_DOCUMENT_TOKEN_TO_BE_REPLACED

The first day of practice at the Gran Premio Generali de la Comunitat Valenciana, the first without Simoncelli, was a very sad and surreal one in the Team San Carlo Honda Gresini garage.

Marco Simoncelli has left a gaping hole behind him and the feeling of sadness was tangible today. Hiroshi Aoyama is desperate to honour his team-mate in the best way possible but he struggled for grip today on a slippery track surface and eventually crashed at the end of this afternoon’s wet session. END_OF_DOCUMENT_TOKEN_TO_BE_REPLACED

Tributes are being paid to the Italian at the final race of the 2011 season, and his fellow MotoGP riders will gather on track with their bikes on Sunday.

Marco Simoncelli’s memory is being honoured in a number of ways at this weekend’s Gran Premio Generali de la Comunitat Valenciana, the final round of the 2011 MotoGP World Championship.

Just under two weeks on from the 24 year-old’s tragic death in Malaysia the entire MotoGP community is marking the close of the 2011 season with a series of fitting tributes to the charismatic and popular rider. END_OF_DOCUMENT_TOKEN_TO_BE_REPLACED 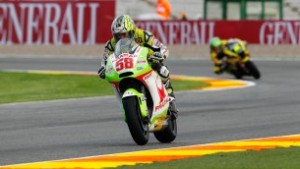 The Italian rider is running the number 58 on his Pramac Ducati this weekend in tribute to his friend.

Loris Capirossi, running the number 58 this weekend at Valencia in honour of Marco Simoncelli, finished day one fifth fastest at Cheste with a best effort of 1’46.108, set in the morning session.

Both sessions were run on a wet track, with the afternoon conditions worse following further rain. Randy de Puniet was seventh quickest of the day with a best time of 1’46.371. END_OF_DOCUMENT_TOKEN_TO_BE_REPLACED

motogp.com presents a profile of the Italian rider’s career and achievements…

By the time he arrived on the Grand Prix scene as a 15 year-old Marco Simoncelli already had a wealth of experience and titles behind him, and his entry into the World Championship arena in 2002 was the start of a career marked by success, ambition, determination, some controversy and plenty of admiration as he progressed through the classes to become one of MotoGP’s most recognisable stars by the time of his tragic death on October 23rd 2011. END_OF_DOCUMENT_TOKEN_TO_BE_REPLACED 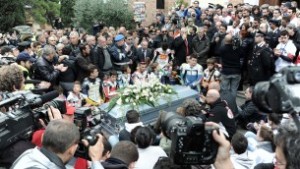 Thousands of mourners came together for the funeral of Marco Simoncelli held at the Santa Maria Assunta church in Coriano on Thursday, October 27th.

A huge gathering of fans, friends, family members and prominent figures from the world of sport attended the funeral service for the MotoGP rider who passed away on Sunday. The funeral was held at 3pm on Thursday at the Santa Maria Assunta church in Coriano, Simoncelli’s hometown, close to Riccione in the Italian province of Rimini. END_OF_DOCUMENT_TOKEN_TO_BE_REPLACED

Thousands turn out to pay repect to Simoncelli ahead of funeral 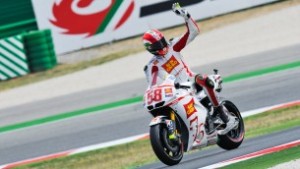 The MotoGP rider’s body was laid out for the public to pay their respects on Wednesday in his hometown of Coriano. The 24 year-old’s funeral will be held today, Thursday, October 27th, at the Santa Maria Assunta church at 3pm.

Long lines of mourners formed early Wednesday morning at the Municipal Theatre in Coriano, the MotoGP rider’s hometown, where the body of the 24 year-old was laid out for the public to pay their respects. Behind the Italian rider’s casket the Gilera bike, on which he won the 2008 250cc World Championship title, and the Honda RC212V, on which he competed in the MotoGP class, were presented. END_OF_DOCUMENT_TOKEN_TO_BE_REPLACED 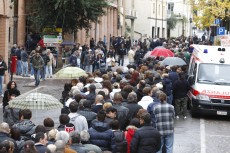 Migliaia in fila per l’ultimo saluto